Showing posts from May, 2013
Show all

Emily Bennet (Jasmine Burke) is a witch in the series The Vampire Diaries. She first appears in Lost Girls (Season 1 , Episode 6)  Apparently her occupation is "handmaiden". After being saved by Katherine Emily felt she owed her and became her "handmaiden". She is a descendant of the Salem witches.

Her dress is pretty for what it's worth but nothing like Katherine's dress.

Jasmine Burke is later recast with actress Bianca Lawson. I will give her Emily Bennet a blog post of her own. I'm not sure why there was a recasting. 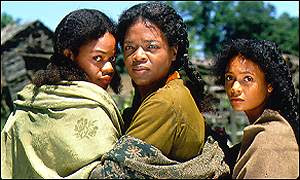 Beloved is a beautiful classic film based on the 1987 novel of the same name by Toni Morrison (she authored one of my favorites , The Bluest Eye). As with all of her novels Beloved deals with situations and experiences of those in the Black American Community.

Beloved takes place after the Civil War (after 1865). This novel was inspired by Margaret "Peggy" Garner. Margaret is infamously known for killing her daughter so that she would not be taken back into slavery.

The cast is amazing featuring: Oprah Winfrey, Thandie Newton, Kimberly Elise, Danny Glover, and Lisa Gay Hamilton. They more than deliver. The costumes and locations are beautiful. Everyone's hair looked realistic and matched the period and culture of the characters.The entire time I watched the film I was completely immersed in that time period.

By Dinah Freeman - May 06, 2013
I will now be posting on tumblr as well as on here. I have planned to only post pictures and minor film reviews on my tumblr page. I will provide a link for my followers to this blog so that they can read the full review.
I have to first create a few pages of post for my tumblr.
Here is a link!
Post a Comment
Read more
More posts