Showing posts from June, 2021
Show all

We finally have the teaser trailer for the much anticipated western, The Harder They Fall!! From Netflix: When outlaw Nat Love (Jonathan Majors) discovers that his enemy Rufus Buck (Idris Elba) is being released from prison he rounds up his gang to track Rufus down and seek revenge. Those riding with him in this assured, righteously new school Western include his former love Stagecoach Mary (Zazie Beetz), his right and left hand men — hot-tempered Bill Pickett (Edi Gathegi) and fast drawing Jim Beckwourth (R.J. Cyler)—and a surprising adversary-turned-ally.  Rufus Buck has his own fearsome crew, including “Treacherous” Trudy Smith (Regina King) and Cherokee Bill (LaKeith Stanfield), and they are not a group that knows how to lose.  Directed by Jeymes Samuel, written by Samuel and Boaz Yakin, produced by Shawn Carter, James Lassiter, Lawrence Bender and Jeymes Samuel, and featuring a red hot soundtrack and a stunning all-star cast, including Jonathan Majors, Zazie Beetz, Delroy Lindo, L
Post a Comment
Read more 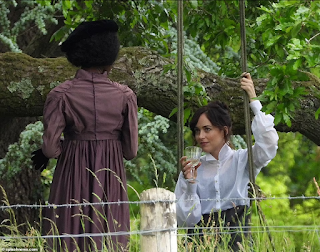 There has been a lot of talk amongst the Jane Austen fandom about the latest adaption of Jane Austen's 1817 novel Persuasion. The Netflix adaption is being described as a "modern, witty" retelling of the Jane Austen classic Persuasion. The latest bit of news from the Persuasion set features actress Nikki Amuka-Bird. Although her role hasn't yet been disclosed, many believe she will be playing the character Lady Russell. Dakota Johnson is leading the film as Anne Elliot.  Nikki Amuka-Bird can be seen wearing a purple pelisse with a velvet beret light draped across her beautiful natural hair. Lady Russell is Anne's godmother and close friends with her late mother. The nice pelisse makes sense for the character as Lady Russel is the wealthy widow of a titled gentleman. Although Lady Russell does make some iffy choices (in the book) and I am eager to see if Nikki Amuka-Bird is actually playing her.
Post a Comment
Read more
More posts