Showing posts from July, 2022
Show all

Most of us know who Emmett Till is. But far less know who his mother Mamie Till-Mobley is. Till takes us behind the powerful story of Mamie Till-Mobley’s quest for justice for her son, Emmett.      The cast includes Danielle Deadwyler (The Harder They Fall), Whoopi Goldberg, Jalyn Hall, Frankie Faison, Jayme Lawson, Tosin Cole, Kevin Carroll, Sean Patrick Thomas, John Douglas Thompson, Roger Guenveur Smith, and Haley Bennett.      Director Chinonye Chukwu has previously wrote and directed Clemency. Till was written by Michael Reilly (producer/director The Untold Story of Emmett Louis Till), Keith Beauchamp, and Chinonye Chukwu.       There was some online discourse around the film. Some believe that at this point in time, this particular story has been covered enough. There have been two major projects featuring the Till story in recent times: the Women of the Movement series that premiered in January of this year and the 2020 Lovecraft Country episode "Jig-a-Bobo". Othe
Post a Comment
Read more

Set in the 1930s, it follows three friends who witness a murder, become suspects themselves, and uncover one of the most outrageous plots in American history.  This exciting trailer is chalk full of one star appearance after another. The cast includes John David Washington, Christian Bale, Margot Robbie, as the leads along side Chris Rock, Zoe Saldaña, Anya Taylor-Joy, Taylor Swift, Robert De Niro, Rami Malek, and so many more.  It hits theaters November 2022.
Post a Comment
Read more

The Woman King is the remarkable story of the Agojie, the all-female unit of warriors who protected the African Kingdom of Dahomey in the 1800s with skills and a fierceness unlike anything the world has ever seen. Inspired by true events, The Woman King follows the emotionally epic journey of General Nanisca (Viola Davis) as she trains the next generation of recruits and readies them for battle against an enemy determined to destroy their way of life. Some things are worth fighting for. The film features a star-studded cast including Viola Davis,Lashana Lynch,Sheila Atim,Thuso Mbedu,John Boyega,Jayme Lawson,Jordan Bolger and is directed by Gina Prince-Bythewood.  See The Woman King rise exclusively in cinemas September 16.
Post a Comment
Read more 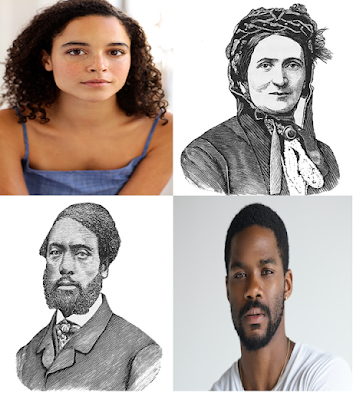 Jovan Adepo and Juliana Canfield will star as abolitionist couple William and Ellen Craft in the upcoming film Everlasting Yea!. Everlasting Yea! will follow the love story of the Crafts and their rise to international fame in the abolitionist movement after escaping their enslavement in Georgia.  The Crafts are famous for the way that they escaped their enslavement. Ellen disguised herself as a white Southern gentleman, and William played the role of her obedient slave. The film is set in the North before the Civil War and will follow the couple as the fall in love, escape slavery, and handle the fame that comes along with becoming an international news story and celebrities of the abolitionist movement. Lynn Nottage has commented on the project stating, “Our film centers the complex reality of free Blacks in the antebellum North, posing the question, what is freedom, and what price must one pay in order to maintain it?” Lynn Nottage and Tony Gerber co-wrote and will also co-direct th
Post a Comment
Read more
More posts