Showing posts from November, 2017
Show all

Water White is based on the 2011 children’s book which was co-authored by Michael Bandy and Eric Stein. The film is based on a childhood experience of author Bandy and tells the story of a boy in 1963 Alabama who is obsessed with drinking water from the “Whites Only” fountain. I was drawn to this movie premise because my grandfather told me about his experience as a child in 1950’s Georgia wanting to drink from the white fountain. Like Michael, my grandfather found that the water wasn’t all he thought it would be. The narrative style and tone of the film fit perfectly as it is from the point of view of a 7 year old little boy. Watching the shenanigans that Michael and his older cousin Red get into was hilarious. Amir and Amari O'Neil were perfectly cast as Michael. Although twins they played the character in the same way. I was not even aware that Michael was being played by twins until I looked up the trailer to write this review. I was also impressed by the actin
2 comments
Read more

Rosa Parks was played most notably by Angela Bassett in the 2002 film The Rosa Parks Story. The Rosa Parks Story was written by Paris Qualles and directed by Julie Dash. It was broadcast by CBS on February 24, 2002. Clearly attention was paid to clothing. I really appreciate when filmmakers look at photographs of their subjects and do their best to recreate the photos. Many photos of Rosa Parks are engraved in the minds of many. Having the look of the film match the image engraved in the public's mind is crucial to believably.  For lesser known public figures (think the ladies of Hidden Figures ) the outfits did not have to be exact replications; only historically accurate. But because Rosa Parks is so well known, the filmmakers had an image to live up to. The film was beautifully done.  Have you seen The Rosa Parks Story? What did you think?
4 comments
Read more 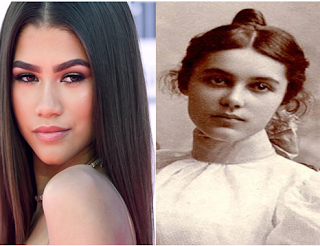 Zendaya and Anita Hemmings According to Deadine , Zendaya will be playing a white passing woman in a film called 'A White Lie'. The film is an adaptation of the Karin Tanabe novel, The Gilded Years. The novel is a thriller based on the true story of Anita Hemmings time passing as white at a prestige school at the turn of the century. Anita Florence Hemmings (born June 8, 1872 in Boston) became the first Black woman to graduate from Vassar College in 1897. She was only able to attend because no one knew she was Black. Interestingly, when the school found out there were not any real repercussions for Anita. She still participated in her graduation festivities and received her diploma without much trouble. I haven't read the novel so it might happen differently in the film. Lebanon Daily News, September 11, 1897 Source: Lebanon (Pennsylvania) Daily News (public domain) Anita was an "exotic beauty" who saw all sorts of attention from Harvard and Y
Post a Comment
Read more

In this trailer we get to see more of the Zendaya as Anne Wheeler. Clearly, she'll be bringing her signature star power to the role of Annie. Visually, the film looks amazing so far. I'm also happy to see other black characters in the film besides Zendaya and Yahya Abdul-Mateen II (as WD Wheeler). I'm looking forward to actual musical numbers from the film. What do you think of trailer 2 for The Greatest Showman?
Post a Comment
Read more
More posts