In this newly released teaser trailer we get a nice look at Denée Benton as Peggy Scott and Audra McDonald as her mother Dorothy Scott. They don't say any lines but they do look intently at one another suggesting future juicy storylines.

John Douglas Thompson will be her father, Arthur Scott. 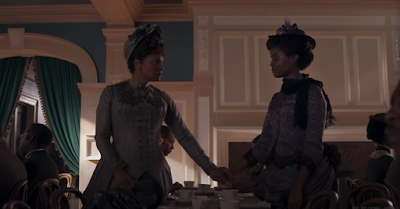 Series Summary: The series begins in 1882 — introducing young Marian Brook, the orphaned daughter of a Union general, who moves into the New York City home of her thoroughly old money aunts Agnes van Rhijn and Ada Brook. Accompanied by Peggy Scott, an accomplished African-American woman, Marian inadvertently becomes enmeshed in a social war between one of her aunts, a scion of the old money set, and her stupendously rich neighbors, a ruthless railroad tycoon and his ambitious wife, George and Bertha Russell.