By Dinah Freeman - January 02, 2013
All of the main and supporting characters of this film are white except for one, Charles (played by Afemo Omilami). This post will be about him and his part in this film.

We first meet him when he jokingly tells Lewellen (Dakota Fanning) that if she keeps on dancing in the tree she will fall out of it.

From the very beginning Charles is a character that speaks his mind. He tells Lewellen that "There's more to singing than just Elvis." and the "Elvis is a white boy singing black music."

Through a conversation between Charles and Lewellen's aunt we find out that Charles' mother cared for Lewellen's mother and aunts and uncles when their own mother wouldn't. Charles grew up with Lewellen's mother because of this they are close.

At one point in the film Lewellen lashes out at Charles in anger saying "You're just a nigger you know!" He responds calmly telling her that she's the nigger because of how she lets people treat her an make her feel.

“The way people put you down, call you names, spit on you, mess with you. People try to make you hate yourself, take away all the things you love the most. You gonna let ‘em do that to you? I ain’t saying life ain’t hard. It is. But you can’t let ‘em win.”

At the end of the film he gives advice that changes the course of Lewellen's life for the best.

Charles is a well rounded character. From his scenes we see that he is an expert concerning snakes. He uses every part of their body. He is even a doctor of sorts. His expertise in snakes comes in handy more than once, during the film he took care of both Lewellen and her aunt. 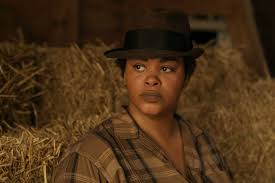 I appreciate her appearance because it brings to the forefront Elvis' cultural appropriation. Something that the film does not skim over or erase. Elvis is considered a musical genius but few people know who Big Mama Thornton is. I feel that by doing this the film paid homage to the person behind Hounddog.

If you like quiet thoughtful films set in the rural South, Hounddog may be for you! But be advised the film is rated R and does feature a scene that may be offensive or triggering to some.


“The way people put you down, call you names, spit on you, mess with you. People try to make you hate yourself, take away all the things you love the most. You gonna let ‘em do that to you? I ain’t saying life ain’t hard. It is. But you can’t let ‘em win.”
film film review Hounddog People of the African Diaspora in Period Films