By Blacks in Period Films - June 24, 2021
We finally have the teaser trailer for the much anticipated western, The Harder They Fall!!
From Netflix: When outlaw Nat Love (Jonathan Majors) discovers that his enemy Rufus Buck (Idris Elba) is being released from prison he rounds up his gang to track Rufus down and seek revenge. Those riding with him in this assured, righteously new school Western include his former love Stagecoach Mary (Zazie Beetz), his right and left hand men — hot-tempered Bill Pickett (Edi Gathegi) and fast drawing Jim Beckwourth (R.J. Cyler)—and a surprising adversary-turned-ally.
Rufus Buck has his own fearsome crew, including “Treacherous” Trudy Smith (Regina King) and Cherokee Bill (LaKeith Stanfield), and they are not a group that knows how to lose.
Directed by Jeymes Samuel, written by Samuel and Boaz Yakin, produced by Shawn Carter, James Lassiter, Lawrence Bender and Jeymes Samuel, and featuring a red hot soundtrack and a stunning all-star cast, including Jonathan Majors, Zazie Beetz, Delroy Lindo, LaKeith Stanfield, Danielle Deadwyler, Edi Gathegi, R.J. Cyler, Damon Wayans Jr., Deon Cole with Regina King and Idris Elba revenge has never been served colder.
The cast is chalk full of amazing performers and that alone is a draw for me. Knowing that the director and creative mind behind this project is Jeymes Samuel makes me even more excited. Samuel is also the writer and director behind the short film They Die By Dawn (2013). I'm putting the trailer below for those that haven't seen it yet. 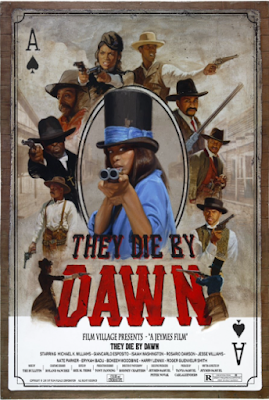 This film seems to be a spiritual successor of sorts. In a 2014 interview he discussed the follow up for his short film would be called The Notorious Nine. I'm thinking the name was changed to The Harder They Fall. Samuel is very passionate about black characters in the western genre and the real life history of black people in the Wild Wild West.