By Blacks in Period Films - July 24, 2022
Most of us know who Emmett Till is. But far less know who his mother Mamie Till-Mobley is. Till takes us behind the powerful story of Mamie Till-Mobley’s quest for justice for her son, Emmett.

Director Chinonye Chukwu has previously wrote and directed Clemency. Till was written by Michael Reilly (producer/director The Untold Story of Emmett Louis Till), Keith Beauchamp, and Chinonye Chukwu. 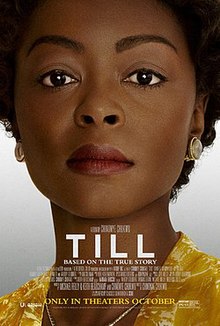 There was some online discourse around the film. Some believe that at this point in time, this particular story has been covered enough. There have been two major projects featuring the Till story in recent times: the Women of the Movement series that premiered in January of this year and the 2020 Lovecraft Country episode "Jig-a-Bobo". Others believe this film is in bad taste because after all these years, Emmett has still not received true justice. Others still simply feel emotionally drained from films, series, and books that portray harsh racial injustices.
Personally, I'm interested in seeing how the film translates the information that was in the 2005 The Untold Story of Emmett Louis Till documentary to film.  I also don't think there can be an oversaturation of films that cover similar topics. Balance is key. There should always be other types of films to enjoy too.
Till will be theaters this October. Will you be watching in theaters?
1950s Emmett Till Mamie Till-Mobley movie trailer poster Till trailer